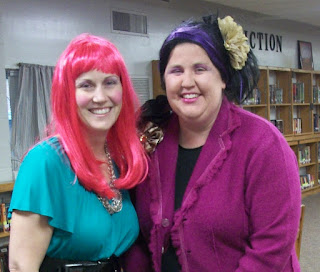 I know there are some amazing parties and events going on around the country in public and school libraries, but I'm going to share my little party even though it was a small event.

We celebrated the movie release with a teacher and student costume contest. I was so impressed by the students' creativity. The student winners were Greasy Sae, a Peacekeeper, Katniss at the reaping and the Girl On Fire interview costume. The teacher winners were three Capitol citizens and an Effie. Above is my version of Effie and one of the teacher winners. They won movie posters and the Hunger Games Read poster for the teachers.
I created a book trivia sheet that the students could answer to win a Mockingjay pin. There was one student that got all of them correct. I guess my questions were pretty tough.
I set up tribute trial stations in the library during lunch. We had a camo matching game, knot tying station, edible or inedible plant game, Nerf archery, push up contest for strength, and the Hunger Games online game on the computers.
Our assistant principal also made some fiery cupcakes.
The students had fun during lunch and I even received a few hugs and thanks for organizing the party.
Posted by Unknown at 11:38 AM