In recognition of Banned Books Week, the 7th grade English teachers had their students read this article about censorship. After reading the article the students came into the library. I talked to the students about the purpose of Banned Books Week, how librarians are trained to protect against censorship, the policies we use for purchasing and challenging books, challenged books we have in our library and, even, challenges we have experienced in our district. The students had several excellent questions.
Our 8th graders read the Wall Street Journal article about how dark YA books can be and this response article.

To celebrate Teen Read Week: Seek the Unknown I placed books in paper bags. Students could check out one of the "unknown" books, write a short review and earn a free book. It was a fun, easy and popular event. It was hilarious to watch students try to find a strategy for choosing the books. A few students said they were too scared to do it because it made them nervous. It was NOT the silly sixth graders in my picture below. 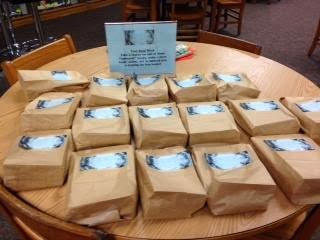 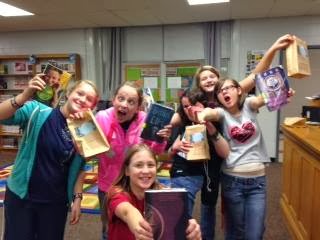 I hope you enjoyed Banned Books and Teen Read Week at your school.

Chomp: Preparing for a Reading Adventure

Last year the Literary Cafe that I hosted for the book, Roll of Thunder Hear My Cry, went so well that the 6th grade teachers asked if I would put something together for the students before they read Chomp by Carl Hiaasen.
I love this book and had a blast putting this lesson together. Students watched the book trailer before coming to the library for this lesson.
The goal of the lesson was to provide the students with the background knowledge to understand the book. I created these four stations:
1. Poverty Infographics
2. Articles on Concussions
3. Survivalist Reality TV
4. Everglades Animals and Invasive Species

At each station I put books on display that relate to the topic. The students had a question to answer for each station. I created a different set of questions for the advanced class.

1. At the poverty infographics station, students examined infographics that I printed on our postermaker. I used these three infographics: Child Poverty, Food Insecurity, and Poor Enough. The instruction sheet reads:

Tuna and her father live in a camper in the Walmart parking lot. She is one of millions of children in the United States that live in poverty.

Poverty is the condition of having little or no money, goods, or means of support.

Examine these infographics on poverty and answer the questions on your worksheet.

I put books on display that related to poverty or had main characters living in poverty such as One For the Murphy's, Dicey's Song, Surviving the Applewhites and Middle of Nowhere.

Students had to list at least two facts from the infographics that surprised them about poverty. The advanced class was asked to explain how poverty impacts children. 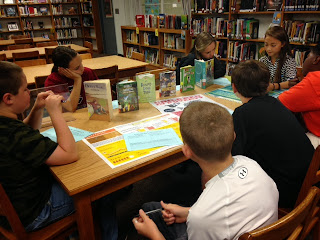 2. Students were asked to read an article about concussions. This is an excellent opportunity to differentiate for reading levels by choosing more difficult articles for advanced readers. I found all of our articles in the state funded database DISCUS.
The instruction sheet reads:
Wahoo’s father suffers from a concussion he received after a frozen iguana falls out of a tree onto his head.
Read these articles about the causes, symptoms, and treatment of concussions.

I put the books Second Impact, Somebody Please Tell Me Who I Am, Full Impact and Fourth Down and Inches on display because they relate to head injuries.

Students had to list some of the symptoms of a concussion. The advanced class had to explain whether or not they thought sports should have more restrictions and justify their answer using the articles. 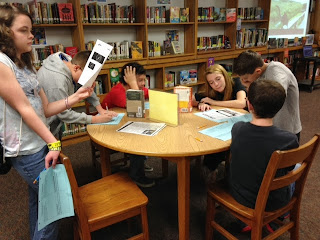 
I put Bear Grylls' survival book, Man Vs Wild, and other survival and nature books on display.

Students were asked if they watched nature reality shows and to list their favorites. The advanced class had to explain whether or not they thought these shows should be called "reality shows" and justify their answer. 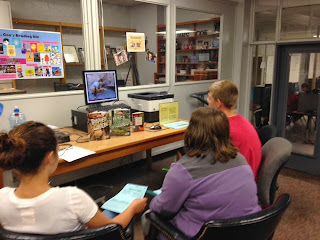 The students probably enjoyed this station the most because of the gross out factor.


4. At this station students learned about the animals in the book. The instruction sheet reads:

Chomp is set in the swampy Everglades of Florida and includes many animals in the plot.
Examine the poster to become familiar with these animals, then watch the clip to learn more about the Everglades and invasive species.

I created this poster illustrating the animals mentioned in the book. I included a map of Florida with the Everglades marked and a picture of an air boat. 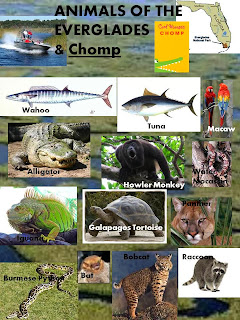 Students also watched this clip from the Everglades National Park Service describing the problem of invasive species in the ecosystem.


I put lots of animal books on display for this station. 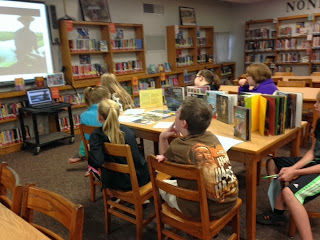 Students had time to check out books when the lesson was complete. I had a huge display of other outdoor adventures and Hiassen titles ready for them.