Saddle Up and Read 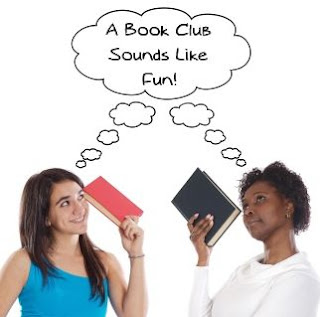 We had our first book/library club meetings this week and I am very excited about this year. Our mascot is the Mustang so our book club is called the Saddle Club with "Saddle Up and Read" as our slogan. I have around 70 students that turned in applications for membership and I invited each one to attend our first meeting. I know that the numbers will probably dwindle as other clubs and sports begin, but this is a wonderful start. you can view the Prezi I used to introduce the club this week. Students have to earn service points to stay in the club by doing things like adopt a shelf, helping in the morning, lunch or afternoon, bringing supplies to events, commenting on my blog or posting to our Goodreads group. I started a group for our club. I created an account with Google Mail so that I could give students an email account for sign up. If you need to do this for something similar you create an account, then have the student add +their name@gmail.com to your group email. The emails will come to you and they do not have to give out their personal information. If you want to join us on Goodreads the group is Palmetto Saddle Club. I plan to use class sets of novels from each grade's book room that are no longer used by our teachers. I may buy more if we can raise some funds. The students have lots of ideas like a book swap and pajama day when the students wear PJs and read in the library during lunch. I will continue to post about our big plans.
Posted by Unknown at 3:56 PM No comments:

Harry Potter and the Chamber of Secrets by J.K. Rowling
-As with all of the Harry Potter series this book is action packed and full of fun and fantasy. I understand that some parents do not approve of books with magic or wizardry in the plot and that is, of course, their decision; however, I feel like these books are a wonderful way for students to get hooked on the fun of reading. Harry Potter has drawn many students and adults into reading and made reading "cool." I will be marking the release of the final movie this November. I only wish I had been a librarian during the release of the books. What a great way to promote reading.

And Tango Makes Three by Justin Richardson
-This picture book tells the story of two male penguins that pair up in a New York zoo and raise an abanoned egg. The book is challenged because of the references to same sex couples. I don't know that really young children would dwell on that part of the story, but instead see that the book celebrates all kinds of families. Let's face it some of our students live in homes with same sex parents and would be happy to see a family like theirs in a book.

TTYL by Lauren Myracle
-I was intrigued by the concept of this book because it is written entirely in the form of text messages. Texting is the most popular way to communicate among tweens and teens so I think this book will appeal to a lot of students. There were many instances of adult language. I liked the story of the teen friendships and the drama that is often a part of those friendship; however, I think the language would prevent me from ordering this book for my middle school students. I would recommend it for some of the more mature students at school.

Gossip Girls: Nobody Does it Better by Cecily Von Zieger
-I have seen the show on TV for this series and was happy to finally have an excuse for reading one of the books. After reading this book I understand the appeal of the series. It is full of drama, fashion, love, and frienship. The wealthy characters live in a world that is a complete fantasy for most teenagers. I would compare this series to adult fashion dramas like Sex and the City and magazines like In Style or Vogue. Again, the language and mature romantic scenes make it too graphic for my middle schoolers, but I would recommend it for older girls that love fashion and clothes.

August House Book of Scary Stories edited by Liz Parkhurst
-I had so many scary stories to choose from on the challenge list, but I had not read this one before so I picked this one up. There were several fun, spooky tales inside that would be great for a Halloween read aloud. One of my favorite all-time scary stories was included on page 67. I will definitely be referring back to this book next month for Halloween read alouds. I recommend this book for all ages because none of them were very graphic and they were more creepy than terrifying.

Killing Mr. Griffin by Lois Duncan
-This book was an excellent example of the creepy tales that Lois Duncan creates. She was one of my favorite authors in middle school and I was happy to read another of her books. I think every student can identify with the characters in their hatred for one of their teachers. Even though the plot sounds horrible if a parent is challenging this book, I like how the teacher's true character is revealed later in the story and the teen characters find out that the real villain is a unexpected one. Great twist at the end.

The Earth, My Butt and Other Big, Round Things by Carolyn Mackler
-This was my favorite read from my choices for Banned Books Week. This book has a main character that most girls, regardless of size, can relate to. She has a difficult time fitting in with her family and finding her place in the cliques at school. There was a heavy petting scene, references to sex and some graphic language, but the overall story is one that most parents should encourage, "Stay true to yourself and love who you are." I have this book in my middle school collection and after reading it I must admit I was a little nervous about it. I want to keep it for our older readers and I hope that my younger students will wait on this one until they are older.

I hope that my programs at school for Banned Books Week will make students think about the importance of protecting our freedom to read. One of the most commonly challenged books "Scary Stories" is our number one book thanks to my booktalks and students that love creepy tales. Even though all of my reads were not good choices for middle schoolers I know that celebrating Banned Books Week is a valuable program.
Posted by Unknown at 4:02 PM No comments:

In honor of my texting program in the library I decided to transl8 my title and first lines into texting language. If you want to transl8 something of your own into text or from text to standard English go to www.tranl8it.com.
I have about 300 students that have signed up to receive texting library notices. I have successfully texted students to let them know their holds are ready. They love it. They text back big thank yous and come into the library bragging that I text them last night. I am using Text Plus on my iPad so it is free and I don't have to use my own number. You should give it a try.
Posted by Unknown at 4:32 PM No comments:

After reading this article I decided to use the idea in our library. Students can request a gold star sticker to put into the inside cover of a book they loved. The opinions of their peers usually mean more than my recommendations so it allows students to rate their favorites. I have had several students ask for stickers already and had overheard conversations about choosing a book. They usually go something like this, "Oh, this book has a star. I want it!" I look forward to seeing how this idea will continue to promote reading at Palmetto.

Horseplay is a gaming program I am organizing. This program will provide opportunities for our students to play board and video games in the library during lunch. Research shows that gaming increases media literacy, problem solving, logic, and social skills. This program will also lure reluctant readers into the library where they can learn about reading programs and check out books while they are here. I plan to begin with board games and work our way up to video games including days for sports, music, racing, and adventure games. I have been busy finding and reading as much information on gaming programs as I can. I attended a session on gaming at the Upstate Technology Conference in Greenville, SC, but wasn't able to get as many details as I hoped for. I did find a site that gave recommendations for readers advisory to correspond with gaming. The School Library Journal has a gaming column in every issue as well as online resources. ALA has a gaming wiki and there is an online guide for media specialists. I would love to hear from other librarians with gaming programs.
Posted by Unknown at 4:09 PM 1 comment: 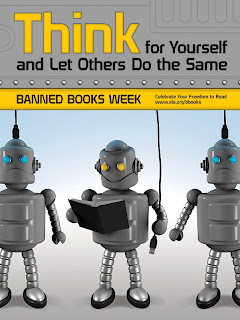 Banned Books week is approaching. This year the week falls on September 25-October 2. This week is so important because it reminds us of our freedom to choose what we want to read and the freedom of speech guaranteed in the first amendment of the Constitution. In celebration of Banned Books week I challenge you to read at least one title from the most commonly challenged or banned books.

I will be reading seven books from the list. One for each day of the week. I will review these titles on this blog. The books I have chosen to read are:

Harry Potter and the Chamber of Secrets by J.K. Rowling
And Tango Makes Three by Justin Richardson
TTYL by Lauren Myracle
Gossip Girls: Nobody Does it Better by Cecily Von Zieger
August House Book of Scary Stories edited by Liz Parkhurst
Killing Mr. Griffin by Lois Duncan
The Earth, My Butt and Other Big, Round Things by Carolyn Mackler

What will you be reading? Why is it important to ensure our freedom to choose what we want to read? Stand up for your right to read.

Thanks to this blog for the idea for the reading challenge.