I think every librarian can appreciate the power of booktalks. Student booktalks can be even more powerful. Thanks to inspiration from Daring Librarian, Gwyneth Jones, our library now has Livescribe Pencast booktalks in several books. I was lucky enough (ok, there was strategy and quick fingers involved as well) to win an Echo Smartpen from Livescribe on Twitter at the end of the last school year. Since then I have wanted to use it to create booktalks with the students. Finally I found a willing teacher. Hooray!
I purchased some of the Livescribe sticky notes for the project, but you can use a piece of the notebook paper and cut it out. I made a quick visit to each class and showed them a few examples I created and told them about the project. I created a booktalk handout for the students and teachers to use to prepare. The students were very excited. The teacher offered this as an alternative to a book report type project that they used in the first nine weeks. There were many students that signed up to record a booktalk immediately. They were all very interested in the Smartpen and I know of at least one that went home and asked for a pen for Christmas. That same student described the pen to his Math teacher and asked her to record her lessons so that he could go home and watch them whenever he needed from home. She promptly went out and ordered one. For some reason the pen has been a hard sell to my teachers. I plan to continue to use the pen with library activities and lessons so that the teachers can see it in action. 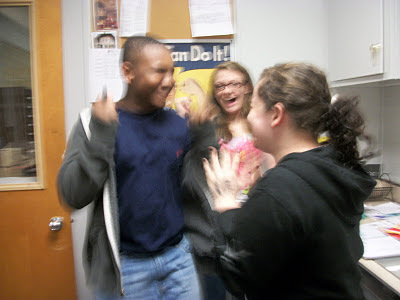 Yes. This picture is blurry. That's because they are jumping up and down after trying the pen for the first time. Luckily I had my camera nearby when I witnessed this spontaneous outburst of teen enthusiasm. I just love working with middle schoolers.


To date I have 8 boooktalks created by students. I plan to put them on display soon and invite the sixth graders to come in and listen to the booktalks. I know they will love it.
Posted by Unknown at 5:20 PM